Everyone has felt the warmth of the sun. That is because when the sun's energy makes contact with your skin, it produces heat. It has been obvious to most that the light from the sun carries with it energy, which until now, has been used naturally for its heat.

In the present time, though, solar research has reached the point that instead of heat, people can make electricity from the sun using materials that, instead of heating up, create currents in their reactions to sunlight.

The prime material is silicon crystals, whose electrons move in reaction to the sun to create currents. These currents are then converted into AC currents, which can be used for any home or building.

Solar panels come with all types of materials, from silicon to copper-indium-gallium-selenide. What is important to note is that all these materials are photovoltaic and will react to light in a way that makes solar energy possible. At their smallest, solar panels are made up of photovoltaic cells, also known as PV cells. When organized into an array, the PV cells make a solar panel, which are easily recognized in the modern world.

Solar panels take in sunlight during the day, create a current without moving parts, and convert that current into useable energy for any home. Solar panel technology has been around for more than 100 years, and since its birth, has come a long way. Through experimentation with a multitude of materials, PV technology is now cheaper and more efficient than ever. When nano technology is integrated into solar panels, the efficiency will be even greater, the units will become smaller, and the uses for solar energy will become even more creative. To give you an idea, imagine nano solar panels even on your clothes! 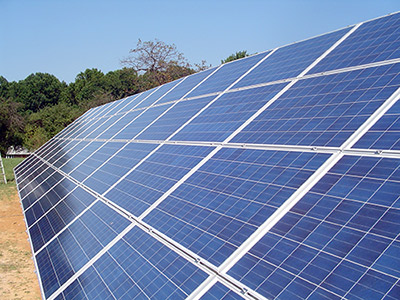 Solar panels are easily accessible through manufacturers and resellers, but make sure that you have the right people informing you how to get the most out of improving your home through solar energy - not just the installation and technology, but also all the financial benefits of going solar, such as government rebates. There are many manufacturers of Solar Panels. Let us explain the difference between the different solar panels. We have done 100's of solar panel installations throughout Maryland using brand name solar panels and we pay attention to every detail during the installation process.